Organics with Altitude on the road: Listowel, Bantry and Killarney 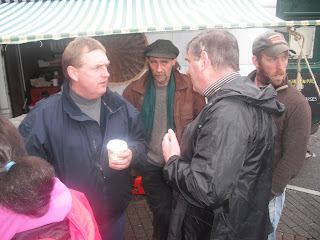 Since the Sligo event, Oliver Moore and Joe Condon have visited Lisrowel, Bantry and Killarney.
The Listowel event was part of the town's Food Festival. Joe spoke at a large agri-food conference, and then, the next day, we held an event in the local farmers' market and in the Seanachi centre. There were also adverts running on local radio, in the community news section.
(Image: (c) Joe Condon and Neilie O Leary talk at Bantry market)
The farmers' market in Listowel is a decent, busy market, quite bit for the size of the town. We met a number of different types of people there: farmers from the Dingle peninsula and west Kerry in general, a few who had seen Joe speak the night previously, Timmy Flemming of the Ring of Kerry Quality Lamb group, and regional farmers from Cork and Kerry who were interested in the initiative in general.
Along with more general questions about all the stages of the protocol, the main question areas revolved stock availability and around consumer perception of frozen meat.
Myself and Joe decided from that point on to develop more information about stock availability for people. We also spoke to attendees of the benefits, from a nutritional and consumer perception perspective, of frozen organic meat, especially of burgers.
In Bantry, we had our biggest group yet, and there were a number of potentially key operators present. We met and Martin O Flynn's organic stall in the Bantry market: there we met John McKenna, IFA Hill farming committee chair Neilie O Leary, and a range of farmers, with everything from 30 to 1000 acres.
We were delighted with the support of Neilie O Leary, who spoke to us of the benefits of farmers working together, and his own love of the taste of heather grazed l;amb.
We had Leap-based in conversion farmer Kevin Crowley at this one too, and it was great to have a regional farmer present who was already converting to organic and already had Galloways. Indeed, I'd say there were a few contacts made there that may last.
A lot of innovative ideas and enthusiasm abounded at this meeting, and we'd be hopeful that we'll work with a few from this group. Some present were concerned about the grazing levels on their commonages; sourcing stock and organic stocking rates for commonages and the suitability of Dexters to the system.
Our final trip away was to Killarney, to the Teagasc organic training course. We spoke to the group about the project, and fielded questions after that. We were delighted to see people we'd encountered elsewhere on this course, as it suggests they are stepping closer to organic. We also spoke to people who already had extra mature mountain lambs or who were interested in direct selling. The questions were very detailed from this group.
In the new Year, we'll be heading over to Connemara.
In the meantime, have a great Christmas and New Year!
Oliver Moore
Posted by ollie at 9:39 AM