We've been beavering away behind the scenes on various fronts over the past few months. More on all of these fronts soon.
In the meantime, here are two very brief updates.
Maggie Gordon of Barfil has certified organic Galloways for sale in Scotland: just 1hr 30mins from the boat. Contact the Galloway Cattle Society in Scotland for more.
And on that, we've had a feature in their occasional journal which was published recently. Again, more soon.
Posted by ollie at 2:23 PM No comments: 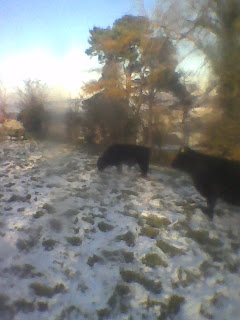 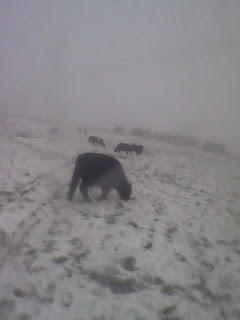 Weather proof, recession proof, climate change proof cattle.
Really, the galloway got it all!
Here are two pics of Joe Condon's cattle taken today and yesterday (R). You can see a deterioration in the weather, but no let up in the cattle's foraging. They love this weather! When goats are coming down the hills in Wicklow, these Galloway cattle go higher.
They develop a double coat of hair in the winter, and have an extra thick skin. This means they don't develop a layer of fat over the winter - Lean, mean eatin' machines!
No expensive, climate busting, potentially GM and ultra-globalised compound feeds are needed for these cattle - they just keep eating the grasses that they themselves help bring on.
As a brucie bonus, this also means that the meat produced is grass fed meat, even over the winter and even for finishing. Who else can claim this?
This is meat that could be produced, literally, if the island was blockaded. This is meat that can be produced when and where nothing else can, and for a fraction of the costs and risks. Other farmers with other breeds will suffer, and will expect some sort of state support if this weather continues. These cattle don't need this.
All of this is also good for the bottom line - compound feeds are expensive, and the consumer pays in the end.
And its not just that there are negatives associated with compound feeds - in this weather it is hard to move them around. Simply put - farmers may find them hard to source and get a supply of.
Joe on the other hand, has no feed or fertilizer bills, and his machinery is a quad bike. The Galloways have access to sheds, but they don't bother to go in as they don't like going indoors.
So costs, with this farming system, simply disappear.
This is farming from the Celtic and Norman times, but it is also farming for the future.
Posted by ollie at 5:17 AM 1 comment: 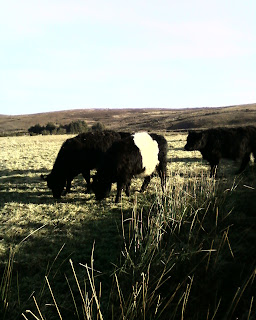 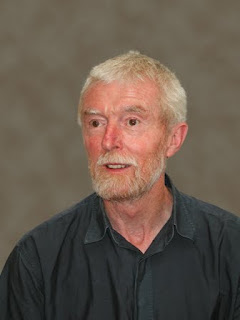 Recently, Dr. John Feehan of UCD visited Joe Condon's farm, the Omega Beef Direct holding, which is the model farm for Organics with Altitude. Here, we'll post what he thought of the visit.
John Feehan is a renowned academic and author of the definitive book on rural Ireland and farming: Farming in Ireland: history, Heritage and Environment.
(A video of his presentation at the Feasta Food event in UCD 2005 is available here)
What he wrote about the visit will be posted as two distinct entries. The first posting outlines the background context of food production in modernity. The second posting will be about the Omega Beef Direct farm visit itself.
John Feehan:
Among the greatest challenges faced by humanity in our time is that of doubling food production in order to feed a population expected to reach 9 billion by 2050. Two-thirds of these people will be in dense conurbations to which they have moved because they can no longer find enough to support them in the countryside. These people will not have the land resources to feed themselves, and will depend increasingly not on food produced in the urban hinterland or indeed elsewhere in their own country, but on imported food.
The options available to meet the challenge do not include taking more land into cultivation, because there is no more land: the good land is already in production. Most of what is left is desert, mountain or city: and indeed, in 2006 the International Food Policy Research Institute reported that 40 per cent of what is farmed today is seriously degraded. We cannot afford to lose any more farmland: in 50 years time we will need every hectare of agricultural land we have.
Areas of the world that are critical to feeding today’s 7 billion will no longer be able to supply their current grain surpluses to meet the need of burgeoning nations that can no longer feed themselves, as rising temperatures put pressure on the world’s great cereal-growing areas and water tables continue to fall as a result of the overpumping of aquifers – in effect, the mining of fossil water that cannot be replaced.
This is a challenge that will take all of our ingenuity and skill, all the more so because it has to be met without further loss of biodiversity and without compromising environmental integrity.
Here in Ireland we are in a privileged position. We will have ample supplies of water into the foreseeable future, and the marginal land allowed to slip out of productive agriculture constitutes a productive land bank that can be reclaimed. We will see farmed once more land on the margins that was taken into production in earlier times and abandoned as the tide of intensification concentrated on the ‘best’ land. This includes the extensive acres on the hills taken from the wild as the population rose to its pre-Famine peak of eight million people to be fed from local resources: reclaimed at a cost in human labour we can hardly comprehend in our mechanized society.
This land cannot be made productive however by applying the oil-dependent intensive techniques of the last 60 years, which will have become obsolete half a century hence. In a future in which the high price of oil will have made the extensive use of fertilizer uneconomic, we will need to develop – or recover – an agriculture that is based on inherent fertility.
This will require an understanding not only of the principles of the applied science of agro-ecology, but of how those principles are to be applied in the unique circumstances of each place. In its newfound adherence to the principles of self-sufficiency this new agriculture will be a return to the older knowledge of the past, but the greater understanding and control which the advance of science and technology have given us will mean that it is enhanced by the best of appropriate technology.
Posted by ollie at 3:19 AM No comments:

Lots of Galloway availability on DoneDeal at the moment.
Have a look here for Galloways in Mayo, Donegal ,Tipperary and Offaly
Posted by ollie at 6:26 AM 1 comment:

Ben Colchester (drumeen farm) has organic rapeseed expeller for sale. this is a high protein winter feed, and it's reasonably priced. His details are here
Margaret Hyde Kelly has15 galloways for sale, c.300 kg c.E500 each. She's on 01 4973426
Finally, Joachim Schafer has a certified organic Galloway bull for sale. 078-48271 E-mail: Galloway@dol.ie
Posted by ollie at 3:21 AM No comments:

Interesting feature on the new look Galloway Cattle Society website about conservation grazing and Galloways.
Have a look here and don't forget to have a look around their site too.
Posted by ollie at 7:55 AM No comments:

Here is the third Organics with Altitude Newsletter. this is a low-res version which should be easy to open on line and download.
HERE IT IS!
Printed copies also available. In this, you can find out about:
Our meeting with Michelle Gildernew (DARD minister for Agriculture); lots about Dexters and how they too suit Organics with Altitude; how to get direct selling; how to retain ownership of your product form start to finish; and how Organics with Altitude is somehow connected to the Wire!
Plus, just in case you are unsure, we have a special feature on what, exactly, is Organics with Altitude anyway?
Posted by ollie at 9:32 AM No comments: 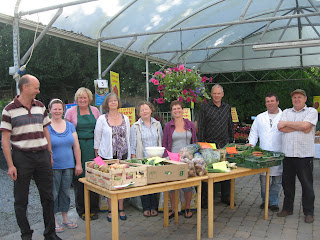 .
How foodie is that?
In fact, there are a myriad of good reasons for bringing these two things together: shelter and general comfort for stallholders, a retail atmosphere, good parking, knowledgeable foodie customers out to spend, ability to 'market the market' at the garden centre 7 days a week, the list goes on really.
It went very well by all accounts, with two of our farmers - Jim Lucy and Martin O Leary - selling out of product well before the end.
The site is here , and here's a pic of the first stallholders:
(L to R: Jim Lucy (black Angus beef), Siobhan Cronin (baking and savoury products), Mary Kay Solomon ( American style baking, fresh eggs and salad leaves), Maria Anthony ( local honey and honey based creams), Bernie Morel ( home made breads), Ann Foley (fresh in-season vegetables), Martin O Leary (lamb), Michael Walsh (fresh fish from Irish waters), Joe Condon of Omega Beef Direct.
Posted by ollie at 1:20 PM No comments: 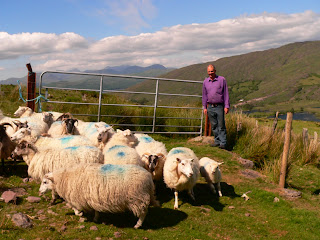 Update: across on my other blog, there an account of the walk and talk myself & Martin had recently.....see here
Martin O Leary is about to start direct selling his own lamb. He's been working with us from the start, and has just started producing lamb burgers, mince and the various cuts. I've tasted them, and have to say they taste amazing!
Very lean meat - the mince tastes very smooth in the mouth - no fat residues left behind in the mouth, as I sometimes get with other mince.
The burgers are real standout burgers, with perfectly texture. The cuts are excellent too - the small amount of fat on them is really sweet, while the meat itself is very tender.
He'll start selling at the new Farmers' Market at Scott's Hotel, in Killarney, this coming Friday. I'd highly recommend his meat.
To whet your appetite, here's a pic from his farm in Gleninchiquin, Beara Peninsula. You can see the Macgillycuddy's Reeks off in the background.
And here's a collection of them on Flikr - well worth a look.
Posted by ollie at 5:52 AM 1 comment: